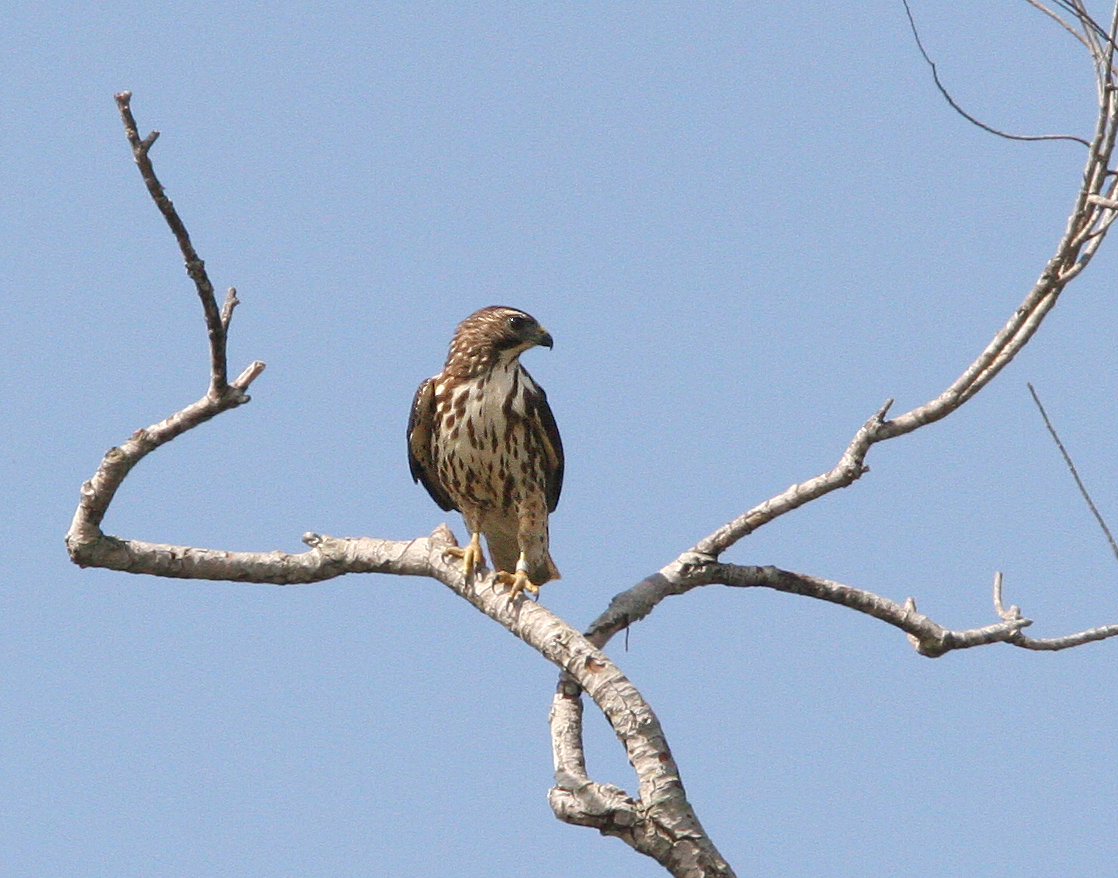 The smallest buteo in the Midwest, the broad-winged hawk has a dark brown back and a light breast and belly. The adult has reddish horizontal barring underneath while the immature bird's barring runs vertically and is browner. The tail of the adult is brown to gray with broad white stripes, and the immature bird's tail is brown with a light-black terminal band. In all ages, the sexes look alike.

The broad-winged is a hawk of eastern deciduous woodlands and is not found west of the Rocky Mountains. Its range extends in the north from Alberta east to Nova Scotia, south through North Dakota, Minnesota, and Iowa to eastern Texas, through the Gulf coast to northern Florida. Populations also exist on some of the islands of the Caribbean.

Found in dense, unbroken deciduous or mixed deciduous/coniferous woodlands, the broad-winged hawk utilizes parts of woodlands for nesting that the red-tailed hawk and red-shouldered hawk do not, sometimes in residential backyards. They are classified as complete migrants flying south to winter in Central and South America. During migration they can be seen in large groups called "kettles" over land masses that produce strong thermals such as Hawk Ridge in Duluth.

Courtship displays include whistling calls and territorial advertisements involving soaring and swooping flights by both members of the pair. Broad-winged hawks often add a ring of sticks on top of an old squirrel nest in the crotch of a deciduous, or on occasion, a coniferous tree. Nests are rarely used for two consecutive years. Two to four eggs are laid and incubated by the female for 31 days.

Like the other buteos, the broad-winged hawk eats a wide variety of prey. During the nesting season, mammals—primarily chipmunks, shrews, and voles—are common in their diets, along with frogs, lizards, and nestling birds. On the wintering grounds of South America, insects, lizards, and frogs seem to make up the majority of their diet. They hunt directly from perches or by searching during flight.

Broad-winged hawks are commonly seen in the clinic during July through September, usually with traumatic injuries. Over recent years, they have been in the top 5 or 6 species admitted.

Considered to be one of the most common hawks in North America with approximately one million birds making up the North American population. They are very common in the Midwest, and the record number of broad-wings flying over Hawk Ridge was 160,703 birds in the Fall of 2003! The broad-winged hawk has no special conservation status in Minnesota, but like all hawks and owls, is protected by state and federal laws.