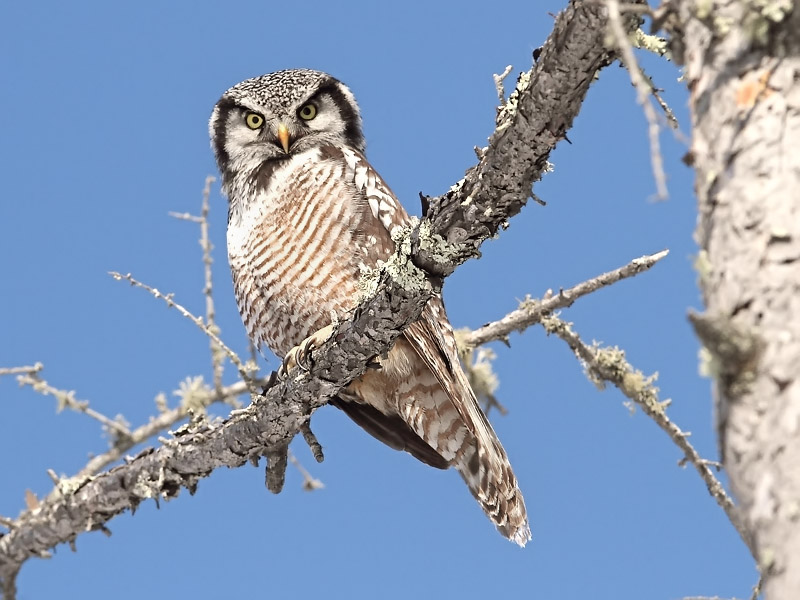 Northern hawk owls are medium-sized and slender, with a long tail and narrowly pointed primary feathers. This owl is dark gray with white spots, white under parts, and dense, dark barring. It has an indistinct, whitish facial disk with a black border, yellow eyes and a yellow beak.

The northern hawk owl is distributed through boreal zones of North America and Eurasia. Hawk owls are nomadic, often migrating south into Canada and the northern United States when prey availability is low. These southern movements are called “irruptions” and owls may travel thousands of miles in search of prey.

The northern hawk owl breeds from April to May and nests in woodpecker holes and cavities in rotting tree stumps. They prefer to nest in old abandoned nests or in hollow tops of dead trees. They can sometimes be found nesting close to areas of human disturbance. The hawk owl lays three to seven eggs that incubate for 25-30 days, and the young leave the nest by 30 days after hatching and can fly within another two weeks. They become independent in another eight weeks.

Northern hawk owls mainly feed on small mammals, particularly lemmings and voles, but also birds, frogs, and even fish. The name “hawk owl” refers to the hawk-like appearance and habits of this species. They will soar, hover, and fly low over open areas in search of prey. During courtship, the males will often try to impress females by hunting for food and bringing it to them. Food is also stored near the nest area in preparation for feeding the young. These owls are diurnal hunters, meaning they hunt during daylight hours. They have also adapted to hunt in the darkness of northern winters. Their feathers are stiff, unlike those of nocturnal owl species. This means that their flight is not completely silent.

Northern hawk owls are rare visitors to The Raptor Center.

The northern hawk owl is not globally threatened, but is not particularly numerous. Numbers fluctuate with rodent populations, and are believed to have declined in Europe.