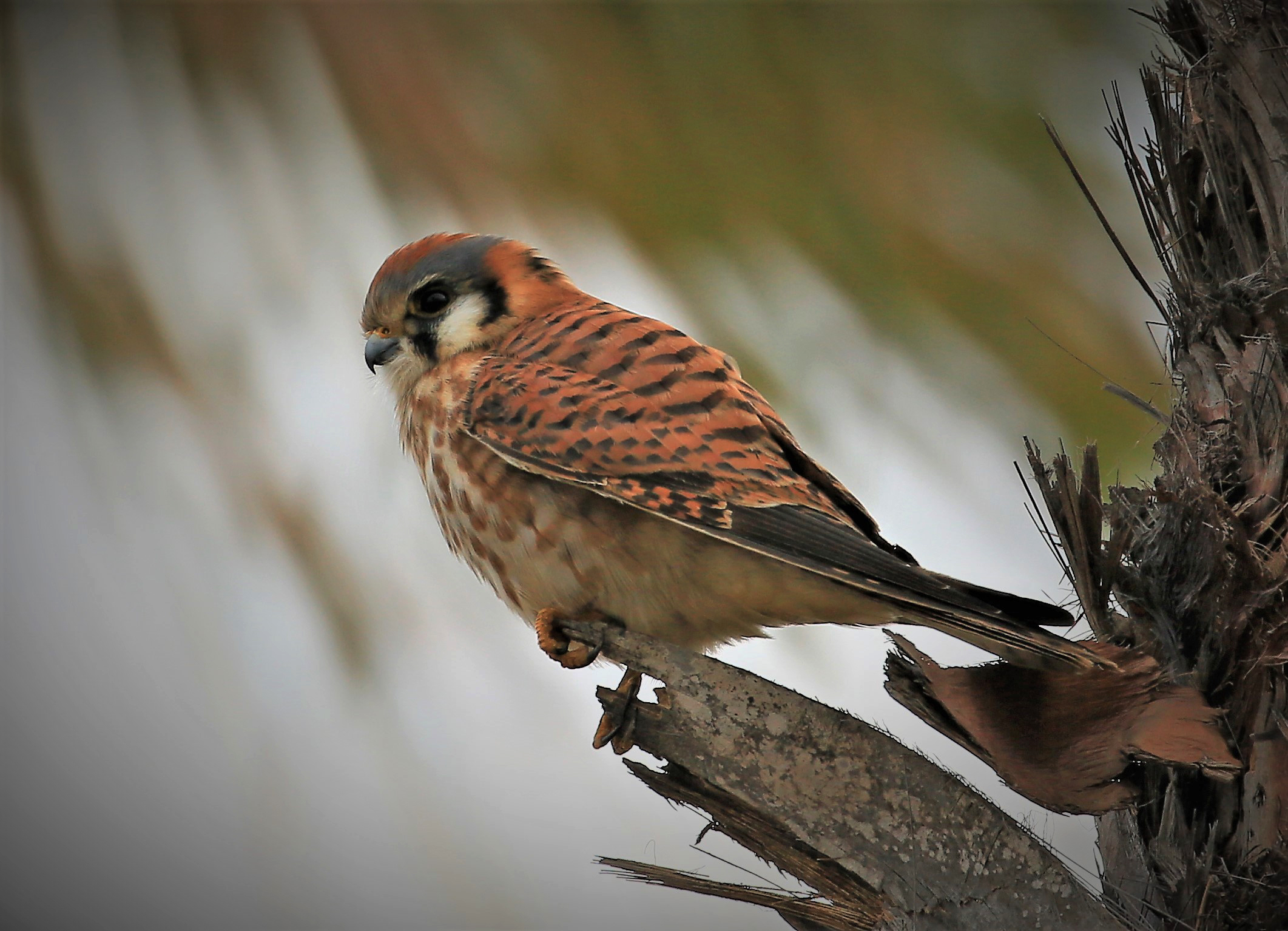 The American kestrel is the smallest falcon found in North America, and with the exception of the Seychelles kestrel (Falco araea), the world. Like all members of the genus Falco, American kestrels have dark eyes, a notched beak, and unfeathered legs. Males have a rusty back, blue wings, and a rusty-colored tail with a black terminal band. Females have rusty wings, back, and tail, all marked with black barring. Both sexes have a dark vertical line running through the eye with white cheek and chin patches. The top of their head is blue with a rusty cap, usually brighter in males than females.

American kestrels are widely distributed throughout the New World. Their breeding range extends as far north as central and western Alaska across northern Canada to Nova Scotia, and extends south throughout North America, into central Mexico, Baja, and the Caribbean. They are local breeders in Central America and are widely distributed throughout South America. Most of the birds breeding in Canada and the northern United States migrate south in the winter, although some males are year round residents.

American kestrels are found in a variety of habitats, including parks, suburbs, open fields, forest edges, alpine zones, and deserts. In addition to requiring open space for hunting, American kestrels seem to need perches to hunt from, cavities for nesting, and a sufficient food supply. In Minnesota they can be found in both urban and rural areas, hunting along roadsides from telephone wires or trees or hovering over fields.

A cavity nester, the American kestrel uses holes in trees, artificial nest boxes, or small spaces in buildings. Both males and females incubate the eggs, which hatch about 30 days after being laid. Three to five young are often hatched. They grow very quickly, assuming adult weight in about two and a half weeks and fledging about a month after hatching. They will nest again if the first nest fails and have been reported to raise two broods per year in some of the southern states.

Once a common patient to TRC’s clinic, the kestrel is now an occassional patient. Twenty years ago, the clinic admitted close to 100 kestrel patients; in 2018 that number was 17.

Although the kestrel is currently not afforded any special status in this area, studies have indicated that the population has had concerning long-term declines over much of its range in North America, including Minnesota. The Peregrine Fund has established the American Kestrel Partnership to help monitor populations and conduct research regarding their decline https://www.peregrinefund.org/projects/american-kestrel.