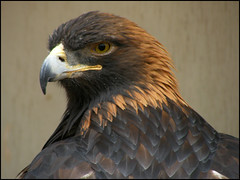 Wingspan six to seven feet; length 30 to 40 inches. Dark brown with a golden or light brown nape and dark eyes and beak. Legs are feathered to the toes. Immature golden eagles have a patch of white on the tail; the adult tail is gray and brown.

The golden eagle is found in North America, Eurasia, and northern Africa. The breeding range in North America includes north-central Mexico, the western United States as far east as the Dakotas, Kansas, and Texas, Alaska, and across northern Canada. During the winter, they can be found in southern Alaska and Canada, the western United States and Mexico. A few golden eagles are seen in Minnesota every fall during migration and there is a small wintering population (~120 birds)  in southeast MN/western WI.

Found in a variety of habitats in the western United States, including mountainous areas, canyons, shrub-land, and grasslands. Nesting occurs in large trees and on cliffs. During the winter they are found primarily in shrub-steppe vegetation in the west and wetlands, river systems, and estuaries in the east.

A large nest is built out of sticks and twigs in a tree or on a cliff. The female lays one to four eggs (usually two) and often does most of the incubation. The males provide most of the food while the females feed and tend the young. Breeding success in this bird is often very dependent on prey densities (especially jackrabbits in the western United States).

Golden eagles prey primarily on mammals such as rabbits and hares as well as larger rodents. Up to 20 percent of their diet is comprised of birds and reptiles. Golden eagles feed mostly on food which they catch, although they will eat carrion.

The clinic admits few golden eagles, since they are not common in this area.

Golden eagles are considered fairly common in the western United States, Canada, and Alaska. They are still subject to illegal shooting due to the erroneous belief that they are a serious threat to ranch animals, and fall victim to such things as lead poisoning, electrocution, and collision with wind turbines.