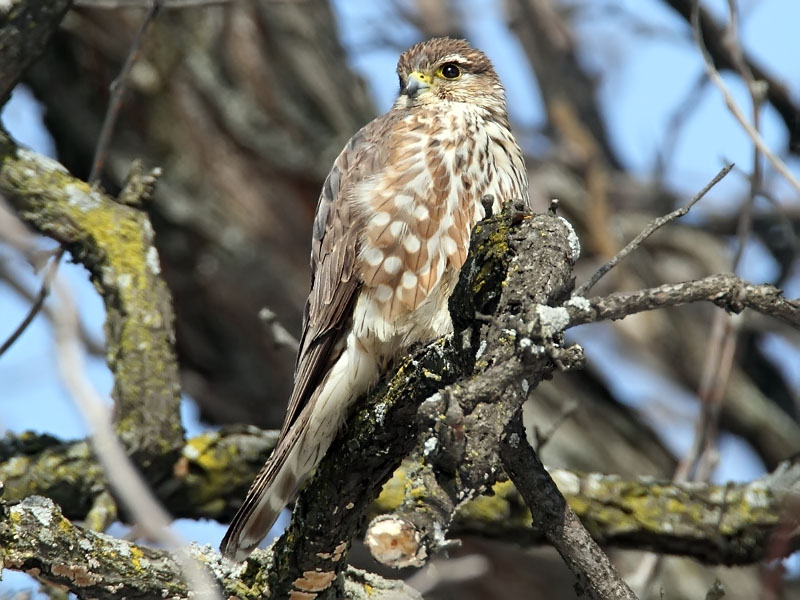 Slightly larger than kestrels, merlins appear uniformly dark in the field. Males are brighter than females, with slate blue wings and back, dark head, and dull facial markings. The underside is rufous with dark streaks. The tail is slate gray with a dark terminal band. Females are uniformly brown with light, brown streaked undersides. Immatures resemble the female.

Merlins are found worldwide, breeding in the northern latitudes and migrating south into Mexico and South America, the Mediterranean, the Middle East, and southern China.

Nests are found in forests or scrublands that are broken up by open areas, where the birds hunt. In Minnesota, they can be found in the northern forested part of the state as well as urban areas, including the Twin Cities.

Like other falcons, merlins do not build their own nests, but instead use the old stick nests of crows or magpies. Up to five eggs may be laid and incubated by the female. The young remain together after fledging and may migrate south together.

Merlins feed primarily on small to medium-sized birds, but will take insects, rodents, and small lizards. They have been known to take birds as large as pigeons, but more often they take small passerines or shorebirds weighing less than 50 grams.

As the Minnesota urban breeding population grows, the clinic admits 20-25 merlins each year.   Most often, they suffer with traumatic injuries.

The merlin is not afforded any special status.