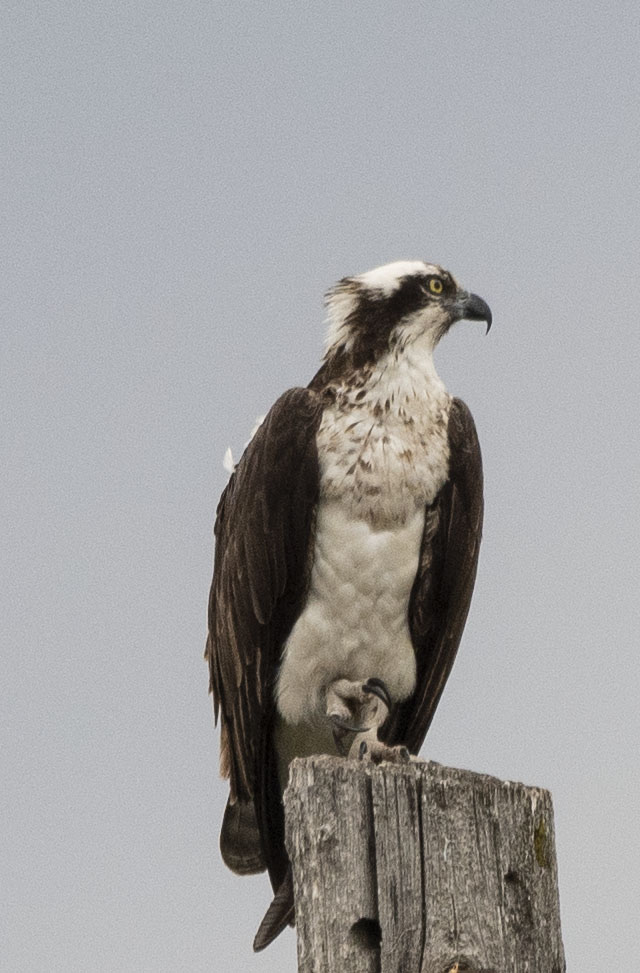 Osprey have a wingspan of four-and-a-half to six feet and a body  length of 22 to 25 inches. They are dark brown above, white below, and have a white head with a prominent black eye stripe. Females usually have a dark spotted "necklace."

Osprey have a worldwide distribution, being found at some time in their life cycle on every continent except Antarctica. They are found breeding in Scotland, and from Scandinavia across northern Europe and Asia to the Pacific. Many of these birds winter in Africa. They also breed in Australia and some of the surrounding Pacific Islands. In North America, osprey breed from Alaska to Nova Scotia south to the Great Lakes states and along both coasts of the United States. Breeding osprey are also found along the Gulf of Mexico from Florida through Texas, and on some of the Caribbean Islands. Migratory osprey are found during the winter through Mexico, Central America, and South America. Osprey are found year-round in Baja, Mexico, south Florida, and south Texas. In Minnesota, they are common on northern lakes and along the St. Croix River during summer.

Ospreys build a bulky nest of sticks similar to eagle nests. In some places, they nest in colonies. Ospreys lay three to four eggs that hatch in about 30 days.

Almost exclusively a fish eater, the osprey is noted for its feet-first plunge into the water when catching fish. Special adaptations for fishing include a reversible front toe and spicules on the bottoms of their feet for grasping slippery fish. After catching a fish, the bird carries it in a headfirst orientation as it flies back to the nest.

Between 10 to 12 osprey are admitted to the clinic each summer.

Osprey have suffered worldwide from the poisonous effects of organochlorides (DDT), habitat loss, and persecution. However, through reintroduction efforts their populations in the U.S. are now stable and they are not afforded any special conservation status.