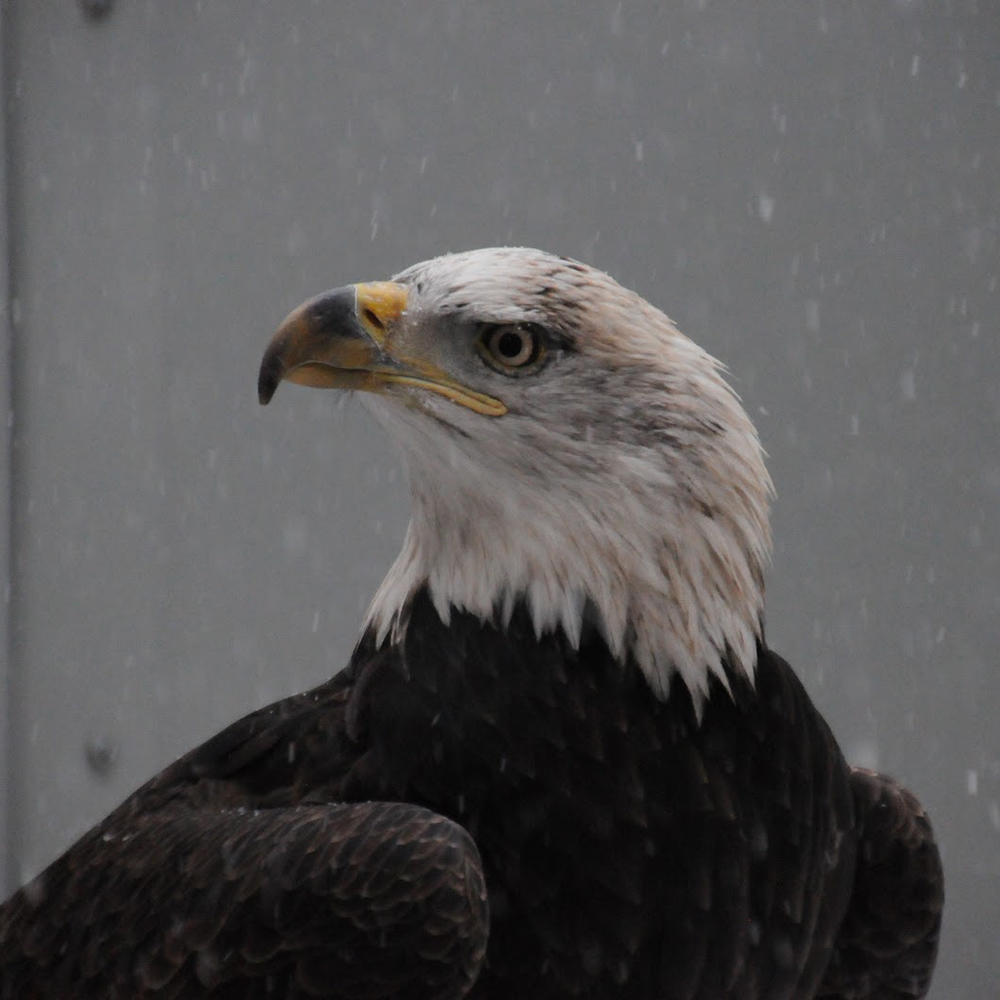 Found in Rush City, Minn., hanging by one leg from a pine branch 75 feet in the air, a juvenile bald eagle was too high for any ladder to reach. Fortunately, one of the concerned citizens mobilizing aid was an army veteran with sharpshooting skills. With time running out and approval from the state Department of Natural Resources, Jason Galvin went to work with his rifle. Ninety minutes and hundreds of precision shots later, the eagle, named “Freedom” by the neighbors, tumbled to the ground. His story made headlines across the world the summer of 2016.

Freedom arrived at The Raptor Center (TRC) following his ordeal and became known by clinic staff and volunteers for his feisty demeanor and near constant vocalization as he was treated for constriction injuries to his toes. After careful assessment, he was deemed non-releasable as his talons suffered permanent injury.

When a patient at TRC is deemed non-releasable and physical criteria for placement are met, the assessment shifts to their potential adaptability as an educational ambassador. Some species and individuals do not thrive in this role. Evaluating a raptor for this role is very strategic and carefully considers the long-term potential for the best quality of life for each individual. Freedom had the curiosity and confidence to learn and thrive in captivity and thus began his training as an ambassador bird.

As he progressed in his training, he proved to be an excellent exhibit bird, wowing visitors with his beauty and engaging enthusiastically in “at liberty” behaviors, such as entering and exiting a crate. However, he did not adapt well to being held on the glove, an essential skill for TRC’s education birds. This hesitancy limited opportunities for the kind of enriching activities critical for his welfare.

Focusing on his quality of life for the next (hopefully) 20 to 30 years, TRC staff looked for a less stressful placement. Almost immediately, they connected with the Turtleback Zoo in New Jersey. The zoo shared its plans for a brand new, free-flight bald eagle aviary and the hopes of providing Freedom a new home and educational role.

The next steps were logistics. Forms, permits, medical records,transportation options, questions, and answers zinged back and forth between Minnesota and New Jersey. One of TRC’s highly skilled volunteers fashioned a custom crate for Freedom’s travels. And then staff members watched the weather. With a sub-zero blast on its way, final preparations were made and Freedom was delivered to Delta Cargo. Staff anxiously watched the progress of his aircraft as he made his way to his new home.

"Relief washed over them when they got word from Turtleback staff of his successful arrival at the zoo. So calm for the day he had!” Just a month later, he was learning to explore his new free-flight aviary in preparation for an official opening in mid-March.