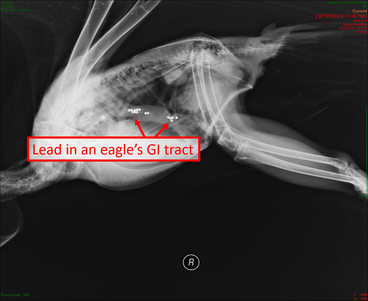 Lead, a naturally occurring element with no functional role in a plant or animal’s system, is extremely toxic to birds. The Raptor Center’s medical clinic admits over 150 injured and ill bald eagles each year. On average, 25-30% of these eagles are documented to have lead toxicity. Most of these majestic birds die or are humanely euthanized to alleviate their extreme suffering.

Research has shown that lead toxicity in eagles and other avian scavengers is strongly correlated with deer hunting season. Eagles and other raptors are exposed to lead through ingestion of gut piles or unrecovered deer contaminated with spent ammunition. Each year in the upper Midwest alone, over half a million deer are harvested, with lead-based products being the most commonly used ammunition. Lead core rifle bullets fragment into hundreds of pieces upon impact, and have been found up to 18 inches from the site of the wound. When eagles and other avian scavengers consume gut piles left on the landscape, they ingest a potentially deadly meal. Even at very low levels of exposure, birds show signs of toxicity, including gastrointestinal dysfunction, neurological impairment, depression, seizures, weakness and death. 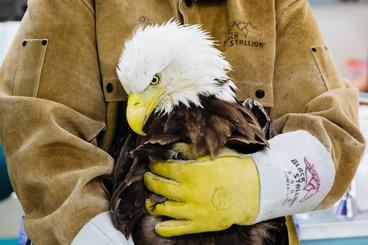 For decades, every eagle admitted to The Raptor Center has been tested for lead levels. In addition to guiding treatment decisions, this has resulted in a long-term dataset on lead poisoning in bald eagles. These data have been used in multiple research studies and as a resource for decision-makers. The Raptor Center has worked with other researchers to demonstrate the connection between lead toxicity in eagles and deer hunting, as well as studied the impacts of lead toxicity on the neurological and cardiovascular systems.

While we continue our research efforts to better understand the impacts of lead toxicity and improve treatment protocols, a key component of TRC’s work is public education and outreach. Working with partners throughout the outdoor recreation community, we focus on educating hunters on how their decisions impact wildlife.

Fortunately, there is an easy solution to this problem. There are many effective, non-lead alternatives to lead-based ammunition, with more coming on the market every year. Replacing lead ammunition with a non-lead option is a responsible choice that eliminates exposure of eagle and other wildlife to a potent toxin. It also results in a safer food source for humans as hunting with lead ammunition has been shown to result in venison for consumption being contaminated with lead.