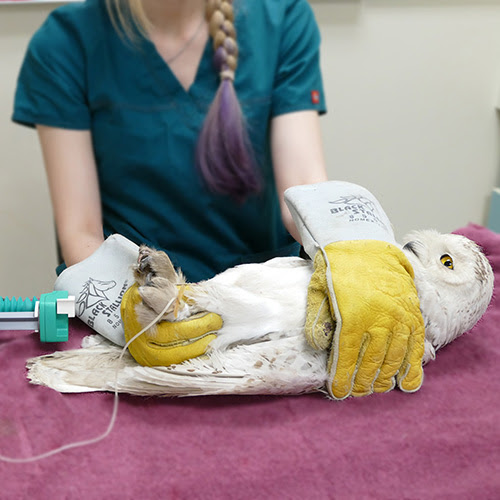 A minimally responsive great horned owl was found in a South Minneapolis backyard and arrived at The Raptor Center (TRC) in August. Upon examination, Annette Ahlmann, DVM, MS student, discovered that it was severely anemic. “We elected to give him a blood transfusion,” she says. The care team also gave the bird supplemental oxygen therapy.

The owl’s care team couldn’t find a wound responsible for the bleeding, so they suspected its critical condition was likely the result of trauma. “But also,” says Ahlmann, “birds often get into rodenticides, which can cause blood clotting disorders.” Blood clotting proteins are produced by a raptor’s liver, which needs vitamin K in order to appropriately activate the clotting proteins. Rodenticides— pesticides that kill mice, rats, and other rodents, and provide short-term control of infestations—hinder this process. “We decided to give him vitamin K,” Ahlmann says.

The owl, who Ahlmann estimates was barely alive upon arrival at TRC, made a significant turnaround thanks to one of TRC’s new syringe pumps, which supplied the bird with a carefully measured blood transfusion to start rehabilitation. Within a few hours of the blood transfusion, the bird was more alert and appeared more conscious of its environment. 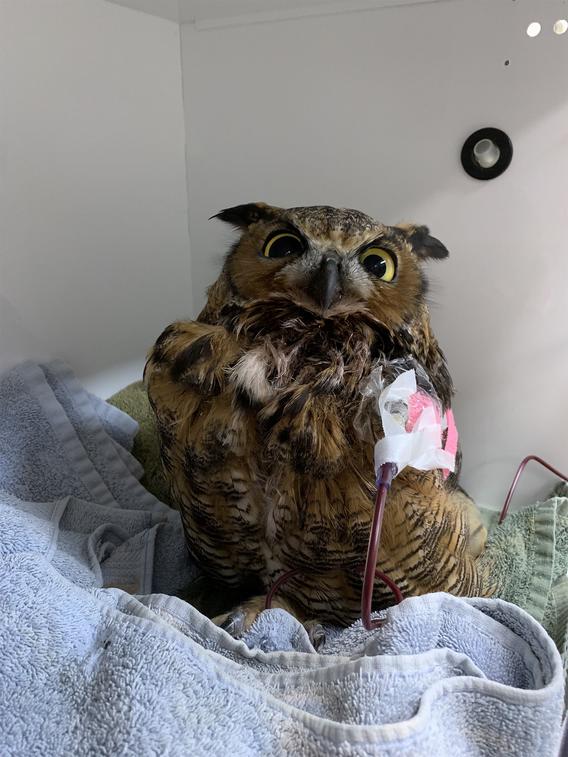 TRC’s new fluid pump and syringe pumps help automate the desired administration rate of fluids, medications, or blood transfusions over a specified length of time. The two new syringe pumps and fluid pump arrived at TRC in June and were made possible by generous gifts from two donors. One of those donors, Miki Cook, has been volunteering at TRC for decades. “I have volunteered in the clinic for more than 40 years and have seen the many needs they have firsthand,” she says. “I don’t necessarily have a lot of extra money, but I felt really strongly about this cause, so I decided to do what I could to make this happen. I have already seen the impact this new equipment has had on our patients, and it makes me all the more excited to volunteer each week.”

Dana Franzen-Klein, DVM, MS, helped provide care to the great horned owl. She says the precision with which she can deliver medications, blood transfusions, and fluids allows her to perform high-quality emergency and critical care medicine. “We have already used them for a couple of blood transfusions as well as to deliver intravenous fluids during surgery,” she says. “When we have given blood transfusions in the past, we had to do it by hand.”

Now, TRC’s expert staff can deliver precision medicine to their patients while also achieving a higher level of animal welfare, as they can now place the birds in an oxygen cage or a quiet, calm place while they are undergoing treatment with a syringe or fluid pump.

The pumps are particularly useful for birds who come in starving. “In starvation cases, you have to introduce food and rehydrate them in a very specific way due to severe electrolyte imbalances,” says Ahlmann. “If done incorrectly, the patient can develop severe side effects, like abnormal heart rhythms.”

Traditionally, veterinarians could measure how much fluid was in a single drop in an IV set and count how many drops fell in a second to get an estimated rate of how fast fluids were being delivered. With the new fluid pumps, fluids and medications can be delivered safely and precisely—if the IV catheter or fluid line gets blocked, or there is air in the fluid line, the pump sends out an alert.

The gifts that supplied TRC with these new pumps have already saved a few lives this summer, but generosity has touched Ahlmann’s and Franzen-Klein’s daily life at TRC in a myriad of ways.

Ahlmann recently finished a one-year internship in raptor medicine and surgery at TRC and has transitioned into a three-year program, functioning as a three year clinical research assistant. The program is funded by the Partners for Wildlife (P4W) initiative, which is 100 percent backed by donor support. As part of her research assistantship, Ahlmann is pursuing a master’s at the University of Minnesota College of Veterinary Medicine. A stipulation of this appointment is that her thesis must improve raptor and wild animal welfare. Julia Ponder, DVM, MPH, executive director of TRC, is serving as her mentor.

“I am very grateful to P4W for the opportunity to continue my clinical work with individual raptor patients at TRC while also transitioning to a new role that will focus more on the big picture of wildlife rehabilitation of all species,” Ahlmann says. “Wildlife medicine is a relatively new specialty within veterinary medicine, and centers such as TRC have started building the foundation of high-quality veterinary care in wildlife rehabilitation. We still have a lot to learn, especially as the veterinary field advances, and TRC has several ongoing projects to advance this knowledge.”

Meanwhile, Franzen-Klein was recently promoted to staff veterinarian, thanks in part to a $50,000 matching gift from loyal donor Bob Wilder. “I am very grateful to be able to spend my career caring for wildlife and educating the public about our interactions with wildlife and what we can do to preserve the world we share,” she says. “I am also grateful to work at an institution with an extensive, committed group of volunteers and supporters that help make our work possible. And even though I have touched hundreds of raptors, I am still fascinated by the unique evolutionary characteristics they have to fill their specific role in nature, as well as their intrinsic beauty.”

Raptors that have recently experienced head or respiratory trauma benefit immensely from supplemental oxygen therapy, provided by oxygen concentrators. This summer, TRC veterinarians have treated several birds each month that required oxygen therapy, and, in some instances, there were two or three birds in TRC’s care that needed oxygen treatment at the same time. But currently, TRC only has one oxygen concentrator. “Oxygen therapy helps birds recover from severe head trauma,” says Dana Franzen-Klein, DVM, MS, “and allows them to get enough oxygen to their body and tissues if they have a compromised respiratory system, such as internal trauma that results in bleeding into the lungs.”

Recently, a young osprey came into the clinic with severe internal trauma (story on page 3). “He was having a hard time breathing because he was bleeding into his lungs,” says FranzenKlein. “Without oxygen support, his mucous membranes were turning blue instead of a normal healthy pink color. So we placed him in an incubator with an oxygen concentrator for a few days, along with additional medical treatment, until he could breathe more comfortably. If we didn’t have the ability to give him oxygen, he probably would not have survived.”

If you are interested in supporting the purchase of a second oxygen concentrator, contact Ellen Orndorf, TRC’s development officer, at [email protected] or 612-624-8457.