From the clinic
What makes a raptor - Part 3, keen eyesight
The Raptor Center

Over past few weeks, we featured two of the three key physical features which make raptors, raptors - beaks and talons. Now we explore the third feature, their amazing and keen eyes.

Raptors have powerful binocular vision, where both their left and right eyes can see and focus on a single object. For raptors like hawks and eagles, the eyes face forward. For owls, the eyes are on the front of the face. This binocular vision is important for predators to see a prey animal in three dimensions and with accurate depth perception. 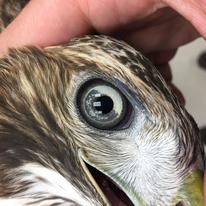 When you and I look at a raptor’s eyes, one of the first things that grabs our attention is their striking color. The irises of raptors are varying shades of yellow and brown, blue/gray, orange, or deep red. Iris color is specific for each species and surprisingly, eye color for raptors active during the day often varies with age. For example, in ospreys the irises transition from red to yellow, in bald eagles from brown to yellow, in red-tailed hawks from yellow to brown, and in bird-eating birds (accipiters) from yellow to orange to red. Some of these transitions occur over the course of the first year, but many take several years and you may even see a bird mid-transition, as shown in the picture of this red-tailed hawk. 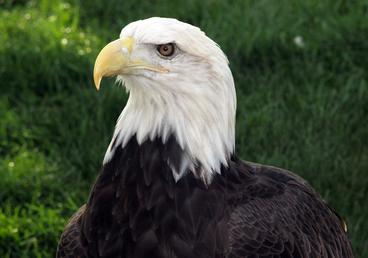 In hawks and eagles, one feature that is immediately noticed is their supraorbital ridge, which is the bony projection above

the eye providing support, protection, and some shade from the sun like the brim of a hat. This is what gives these birds a “fierce” look. This ridge is absent in owls.

Going more in-depth, raptor eyes are specially designed to provide the keen eyesight needed to catch prey. First, raptor eyes are large. They are so large they fill about 1/3 of the space in their skulls. Because this leaves little room, if any, for muscles to allow eye movements, raptors must turn their entire head to look around them. In fact, raptor eyes are held in place with a ring of bone called the sclerotic ring. 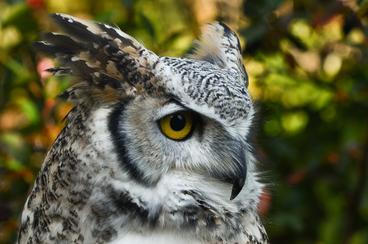 The shape of the eyes also plays a key role. Owls have a tubular-shaped eye while hawk eyes are more spherical. In owls, this tubular shape is significant because the cornea and pupil are large relative to the retina, allowing more light to be gathered even in low light conditions. This, along with retinas that have a high concentration of rods, or photoreceptors which absorb light and translate it into black and white images, provides owls with superior vision at night. Hawk retinas, on the other hand, contain many more cones, photoreceptor cells that absorb colors and produce sharp color images. In fact, some diurnal raptors have about twelve times the number of cones compared to our eyes. Visual acuity increases dramatically with increasing cone density.

There are so many amazing adaptations to raptor eyes and each species has evolved ways to fit their ecological niche. Daytime raptors like hawks and eagles have a bony ridge to give support and sun protection, falcons have dark stripes under their eyes like a football player to help reduce light glare, and owls have tube-shaped eyes to maximize the light collected in dark settings. But all raptor species share powerful and keen vision that aids them in catching prey, avoiding predators, and navigating their environments.