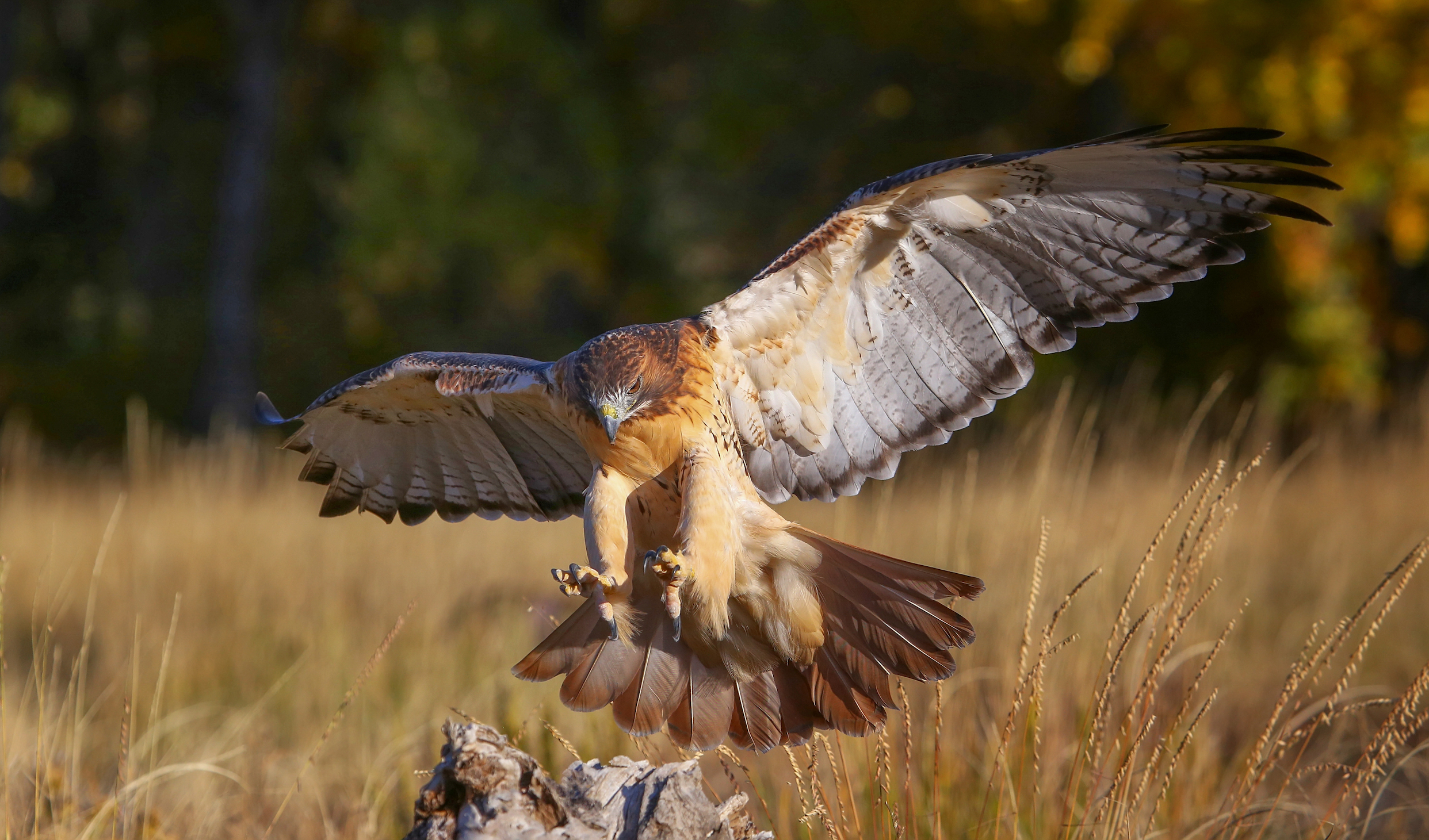 A large hawk, usually weighing between two and four pounds, this species shows a great deal of individual variation in plumage. The adult has a rufous-colored tail that may or may not have a black terminal bar. The exception to this is the Harlan's sub-species, which has a white tail mottled with black. Adults are dark brown on the back and the top of their wings. The underside of the bird is usually light with a dark belly band, and a cinnamon wash on the neck and chest. However, there are both light-colored and dark-colored races that confound this. The Krider’s hawk is a light-colored prairie dwelling sub-species that can be mostly white, with no markings on the white chest and belly, and a very light-colored head. Melanistic (dark) birds have very little light coloring and appear totally dark brown. In all of the color phases, the undersides of the primaries are light-colored. Immatures resemble the adults, except that their tails are brown with dark bars; the red tail molts in during the bird’s second year.

The red-tailed hawk’s breeding range extends from central Alaska through Canada and across the entire United States, south through Mexico and into Central America. In winter, many of the northern birds move south; however, some  red-tailed hawks stay in Minnesota year round.

In Minnesota, the red-tailed hawk is found around open fields, especially near woodlots close to farms and cities. Not a bird of the deep woods, it is usually found in grasslands or marsh-shrub habitats.

Red-tailed hawks typically do not begin breeding until their third year. Pairs build a large stick nest near the top of a tree (usually deciduous) at the edge of open canopy woods. In central Minnesota, farm and suburban woodlots are often are home to a pair of nesting red-tails. Two to four eggs are usually laid in April or May, hatching in about 30 days. The young remain in the vicinity of the nest until they can fly, then follow their parents as they learn to forage for themselves.

Red-tailed hawks feed on a wide variety of prey. Mammals commonly make up a large part of their diet, and include everything from small mice to rabbits and hares. They will also take medium-sized birds and reptiles such as lizards and snakes.

The most common hawk received by the clinic, the red-tailed hawk is often the victim of vehicular collisions, shooting, and diseases such as West Nile virus.

A common hawk across its range, the red- tailed hawk has made a spectacular comeback since the days of hawk bounties. One of the most well known and commonly seen hawks in the Upper Midwest, it is afforded no special conservation status.