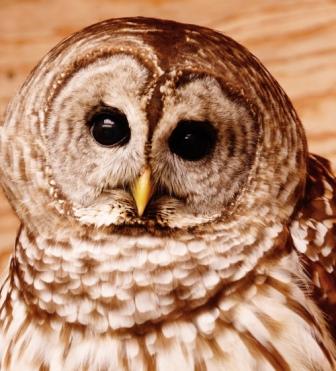 Strix was found in southwestern Minnesota along a roadside in early 2010. The bird was admitted into The Raptor Center’s clinic with a small corneal abrasion on the left eye, and the right eye had a torn retina. The bird’s right scapula was also fractured. Though Strix recovered vision in the left eye, the right did not recover and he is permanently non-sighted in that eye.

The name Strix is from the Latin name for this species, Strix varia.

Barred owls are common owl species in urban landscapes such as riparian areas in parks and other wooded habitats. They tend not to move far from natal territories, so they can generally be found year-round in their breeding ranges. The call of this non-tufted bird is the distinctive, “Who cooks for you? Who cooks for you all?”